Old El Paso, my old friend, may I never look down on you again…

So let me start this by saying I'm not one to normally moan or bitch about places that I dislike too much, I would rather waste my time singing the praises of great places to eat or things cook but fuck me, this has to be said. So let me tell you a story of hope, joy, sorrow and disappointment.


On a cold Monday’s eve I was stumbling about the city with my fellow drogues after a touch of ultra violence and a few wee drinks. The lads and ladettes were getting a little peckish and looking to be satisfied by anything that even remotely reminded us of food. So as we walked down the Paris end of Collins after discovering how Metro would delay us until the end of time, we figured we’d get ourselves a bite to eat.

As we walked near the door of this establishment I noticed that, for the first time, there was no line at all, no string of lemmings being squished together like a group of battery hens as I sadly had experienced before, which usually ended with me giving up and returning down the road to my beloved Collins quarters. So my hope raised up thinking that finally the Gastronomy Gods were shining down on me and I would be granted the pleasure to eat some of those tasty tacos that everyone seems to be singing their praises of.

Of course I still had a small amount of doubt that we would most likely have to wait because that's what Mamasita likes to do, make people wait. This, however, was not the case. We walked up the stairs only to find ourselves being whisked to a table almost immediately and once again I felt that things are on the up and up and I was about to experience a wonderful feast. Sadly this is where things took a turn for the worse.

Our chips Arrive promptly after ordering with guacamole and a salsa ($8), gleaming with excitement we all start to dig in only to discover a bland, tough, cardboard like texture in our mouths. I tried to over power this with the salsa or guac, or both, but the guac tasted so bland it was like they went out of their way to find the worst avocados they could then proceed to under season them, then barley added any spices/herbs/veg that makes a real guacamole so great and the salsa, while being slightly better then one would find in a Doritos salsa, still was nothing to be writing home about.

Also arriving at our table was the Mexican “salsa Verde”, which we were strictly told by our waiter to not use on anything but the tacos or burritos because “…on its own it doesn’t taste very good“. This of course only made me want to eat it more and surprisingly it wasn’t too shabby at all… silly hipster. Anyway I digress, so next up we were served de Carnitas slow braised pork with Encurtidos & jalapenos and with the description of this dish how could this not be redemption? The dish came served in 3 stale and dry tortillas which were delicately balanced by dry, bland and tasteless pulled pork and some other shit in there which I my poor little tastebuds couldn’t taste for lack of FLAVOUR. 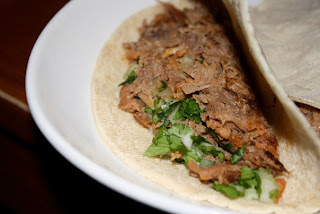 I would just like to note at this point that I wasn’t trying to be negative about this meal, I was trying  my hardest to convince myself that this was incredibly tasty and it was merely that I haven’t ever experienced the real joys of Mexican food before.

Next up was the de res y Chorizo which, once again, sounds like it would bring great flavour but sadly was like a boring, bland and tasteless jab in my mouth leaving myself feeling used and unloved. 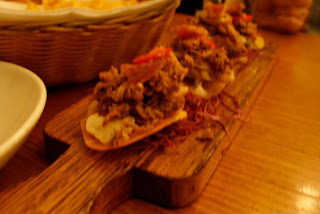 A slight redemption arrived after this and apparently, according to our hipster waiter, was the best dish on the menu: The Chocolate Chicken.  Now I love the combo of chilli and chocolate, so I was eagerly awaiting to try, in some light of new hope, the brilliance I have heard spewed out about this place of supposedly amazing food and to be nice, this was the closet thing I came to liking anything on the menu but, alas, it still had a large “MEH” factor. It was ok and that was it. OK… that’s all Mamasita could give me, not one “ohh, ahh, mmm” just a simple shrug of the shoulders like, ‘meh’ it’s “ok“.

I’d also ordered the usual safe bet of goat’s cheese with zucchini flowers(tamales de flor calabaza),
unfortunately it also,
sadly and once again didn’t reach any heights of greatness and barely raised itself towards “ok“. 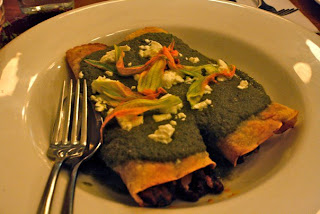 Overall looking back at it (which was a few weeks ago so I can calm down and not be writing in a mindset of wrath and fury), I can honestly still say it sucked and maybe it was a once off and I just happened to go on the one night that was stale taco night, but I’m not willing to risk it again.

Oh and just on a quick note, our cocktails sucked too.

If anyone has anywhere else they may recommend for some awesome Mexican food, then let me know. I hear Taco Bill does great fish bowl margaritas and I heard the Sth Melbourne Taco even recently won an award for customer chosen best restaurant…..

Mat Beyer
Well I guess I could say alot about me like how when I was 3 years old and tried to lick the freezer and got stuck and then my panicked mother came in and without thinking ripped my head straight off leaving a nice bit of tongue for one and all but maybe that’s a bit much to be telling on the first date. I am obsessed with food and it consumes most of my day when im at work all I can think about is what im going to cook or eat that night. I also have a passion for wine so much so I try to drink it all the time to understand it ummm yeah that’s it..... :P.The Name comes From a passing comment that my old housemate made every time I was in the kitchen (which well was very often)she say in a sarcastic voice "cooking with Goths”. So I hope you enjoy my ramblings, my reviews and recipes or just enjoy the pretty pictures of food. Fell free to contact me on twitter at twitter.com/cookinwithgoths.or Mathew.Beyer@gmail.com for any Fanmail, sponsorship, appearances and food related things.