I’m the first to admit that I may have a slight weakness for truffles, actually a massive weakness. It’s that sexy heady aroma that brings me to my knees ,like smelling a good burgundy I could sniff it for a few hrs before even consuming maybe even concocting some sought of bucket to head truffle sniffing device which I guess would be great on trams or the peak hour train instead of smelling the armpit of everyone around me I’m in sniffing heaven.
Ms paint at its best. It’s like chroming but for rich people
So needless to say that when I heard Melbourne fringe food festival will be hosting a truffle dinner and it will be cooked by none other than Matt Wilkinson I wanted in.
It was unlike most truffle dinners I have been too because it had a range of different truffles from varying states(nsw,tas,w.a). It started off with baskets filled with truffles being passed around so we could really smell the difference between states. The nsw was a lot less on the nose compared to the massive aroma of the W.A where the Tassie somewhat sat in-between these two but still packed a bit of a punch and would have no problem chowing down on these bad boys. Matt comes out and gives a little informative talk about truffles and a little story then shortly after an overwhelming aroma starts to fill the room and then the fungi high kicks in and for once I actually know what’s going on unlike most fungal highs I have had J.  A sexy little number of polenta,prawn,crab and a very generous amount of Tassie is micro planed across the whole dish, it’s a sexy yet incredibly complex group of flavours I loved the creamy polenta and the occasional contrast of the seafood in mouth but the truffle can still shine and become the hero of the dish rather then something floating along in the back needless to say each bite was sex in the mouth and I was having multiple orgasms (brb need to change pants). 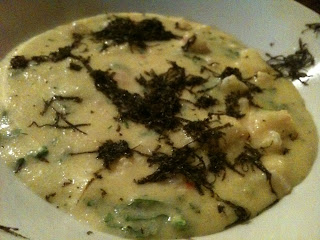 Up next was a tasty little dish of purple congo potato and some other potato I forget, capocolo ,golden deep fried but still runny quail egg(I think otherwise that’s some tiny fucking eggs)rocket pulled from matts garden that morning, tarragon emulsion and of course NSW shaved truffle. 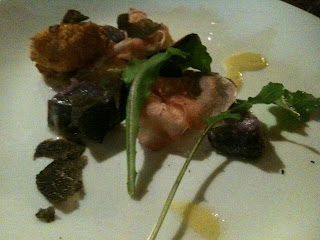 Another simple tasty dish where the ingredients just spoke for themselves ,I loved the NSW truffle it had in my opinion the most flavour of all the truffles when eaten but maybe the weakest nose.
And now on to my favourite dish of the night also the most simple : One week WA truffle infused Brie de meaux, toasted sourdough 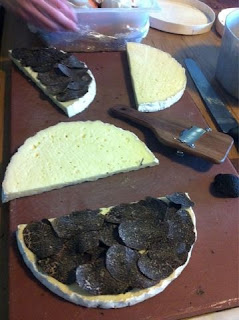 It’s just by simply cutting a big arse wheel of brie in half, slicing a shitload of W.A truffle put the other top on, leave for a week and serve. 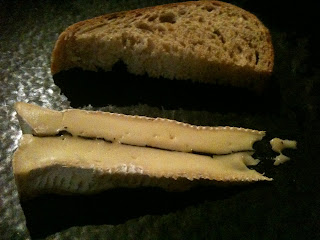 Oh yeah look at that, its begging to be dug into, The reason why I loved this so much is it really took on the truffle flavour and because it the W.A truffles It had a huge aroma. Plus well its good brie and good quality bread what’s not to like, plus I had pinot so life was pretty sweet.
Last but not least we had a truffle taste test, it was conducted with scrambled eggs(easily one of the best things to do with truffles) and we all had to guess which piece was from which state. Sadly there was no prize for guessing them all correct as this truffle tragic had done. 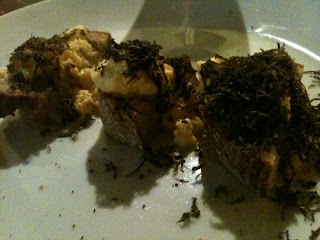 My memory now is kind of fading on me as if I have consumed a bit of burgundy  currently but I think it went, W.A,NSW,TAS
Overall though I had a great night drink some tasty wine from Holly’s Garden, had great conversation and caught up with some old blogger friends.  Rumour has it that another truffle dinner is coming up the 14 or 15th of July you better be quick though as this dinner sold out in about a day. Check  http://www.fringefoodfestival.com.au/ for details.
Posted by Mat Beyer at 9:21 PM

Mat Beyer
Well I guess I could say alot about me like how when I was 3 years old and tried to lick the freezer and got stuck and then my panicked mother came in and without thinking ripped my head straight off leaving a nice bit of tongue for one and all but maybe that’s a bit much to be telling on the first date. I am obsessed with food and it consumes most of my day when im at work all I can think about is what im going to cook or eat that night. I also have a passion for wine so much so I try to drink it all the time to understand it ummm yeah that’s it..... :P.The Name comes From a passing comment that my old housemate made every time I was in the kitchen (which well was very often)she say in a sarcastic voice "cooking with Goths”. So I hope you enjoy my ramblings, my reviews and recipes or just enjoy the pretty pictures of food. Fell free to contact me on twitter at twitter.com/cookinwithgoths.or Mathew.Beyer@gmail.com for any Fanmail, sponsorship, appearances and food related things.